Throughout the rooms, you will be confrunted with the situations in which Jean Moulin and Philippe Leclerc de Hauteclocque found themselves and the choices they had to make during the Second World War.

The chronological itinerary of the visit corresponds to the actions of Jean Moulin and Philippe de Hauteclocque in France between the two world wars, the debacle of June 1940 during the Occupation, the Internal Resistance and the fighting until the liberation of France, of which Paris remained the most powerful symbol.

In the nineteen-twenties, France was recovering from World War I, but the economic crisis of the thirties plunged the country into a tense social and political climate.

Philippe de Hauteclocque and Jean Moulin were born before World War I. Objects and photos evoke their childhood and the first positions they held. The education and assignments of Philippe de Hauteclocque are evoked by his shell jacket and his burnoose, which dates from his years in Morocco. Jean Moulin’s skis and his box of pastels suggest the sports and artistic activities of the Prefect. War was declared on September 3, 1939. The two men were driven by the same patriotic spirit. Captain de Hauteclocque joined the Fourth Infantry Division, but Moulin, in spite of the Air Force uniform shown on the pathway, was obliged to remain at his post in Chartres. However, operations took an unexpected turn. After eight months of war, the Germans attacked the Netherlands and invaded France in just a few weeks. 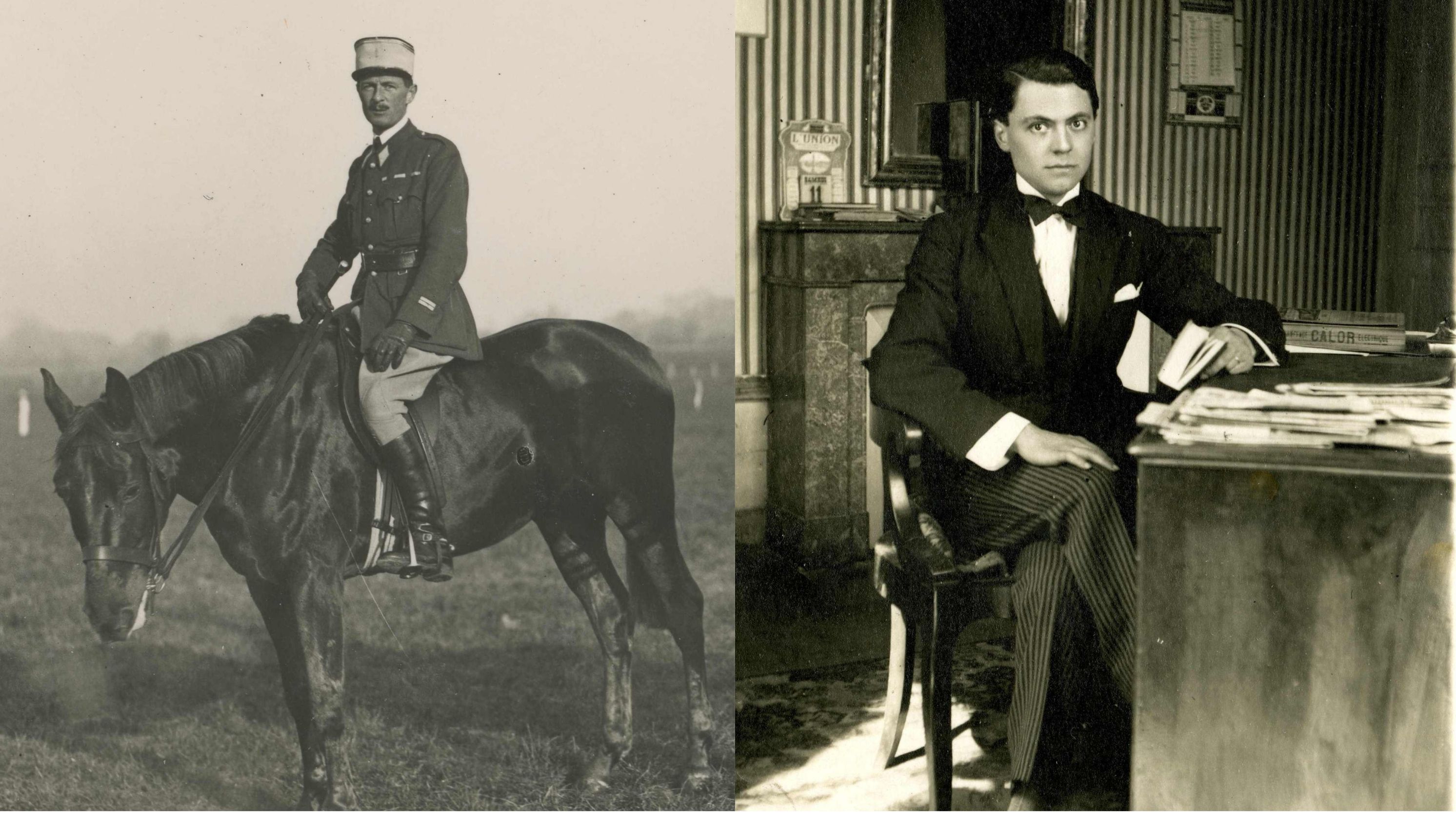 The device installed in the lobby of the pavilion shows the exodus and action by Prefect Moulin. Plates installed on the floor feature a mix of photos, archive films, quotes and animated maps. An evocative soundtrack accompanies the discovery of this tragic period. 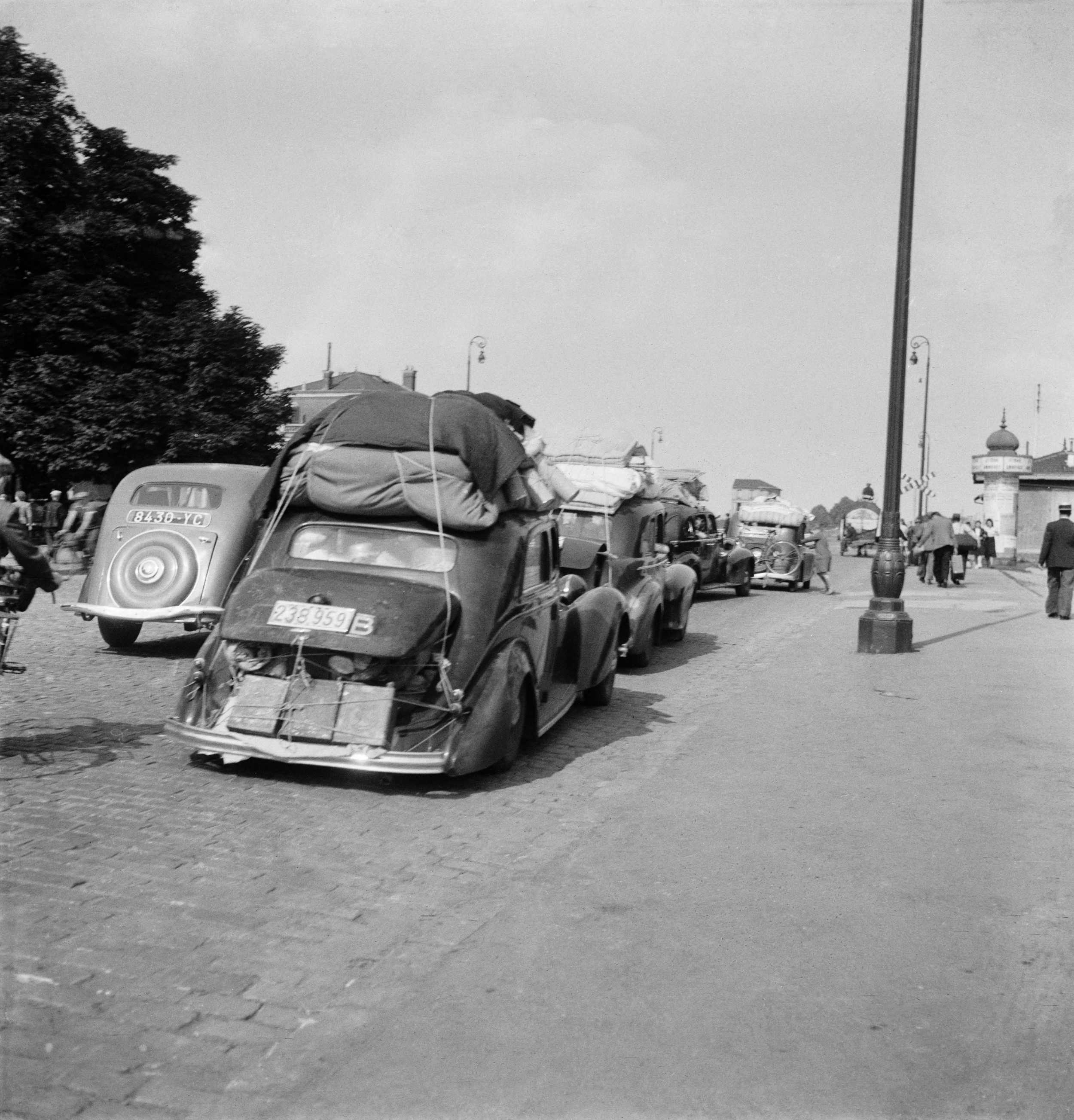 Room 4: CAPTAIN DE HAUTECLOCQUE AND THE MOMENT OF CHOICE (SUMMER 1940)

The German invasion provoked very different responses. Between June 14 and 18, 1940, definitive decisions were made that committed the future. An audiovisual installation describes the positions of Marshal Pétain, who headed the government, General de Gaulle, Jean Moulin and Philippe de Hauteclocque. The latter would go to the United Kingdom under the name Leclerc, as shown on his English identity card. He was given a mission that sent him to French Equatorial Africa.

On June 14, 1940, German troops victoriously entered Paris. Marshal Pétain, head of the new French state and the government based in Vichy, implemented a policy of collaboration with Germany and the elimination of socially undesirable elements, such as republicans and Jews, which were designated as responsible in varying degrees for the French defeat. Children’s items reflect the Vichy propaganda, while newspapers, posters and brochures denounced what was considered to be “anti-France”. Economic and political collaboration was on display in occupied Paris. Everyday life became increasingly difficult, rationing was organized with a system of cards and tickets, and raw materials were lacking. For Jews in Paris, the situation became dangerous. The French government and administration agreed to assist the Germans, who followed a policy of exterminating the Jews. In Paris, the Vel’ d’Hiv raid on July 16 and 17, 1942, concerned over 13,000 men, women and children. Graffiti from the tiles of the Drancy concentration camp and a milliner’s hat help to understand the tragic destiny of French Jews, 72,500 of whom were killed.
The establishment of the mandatory work service (STO) was met with a very negative reaction from the population, in particular from Parisians. Many young people attempted to avoid it. 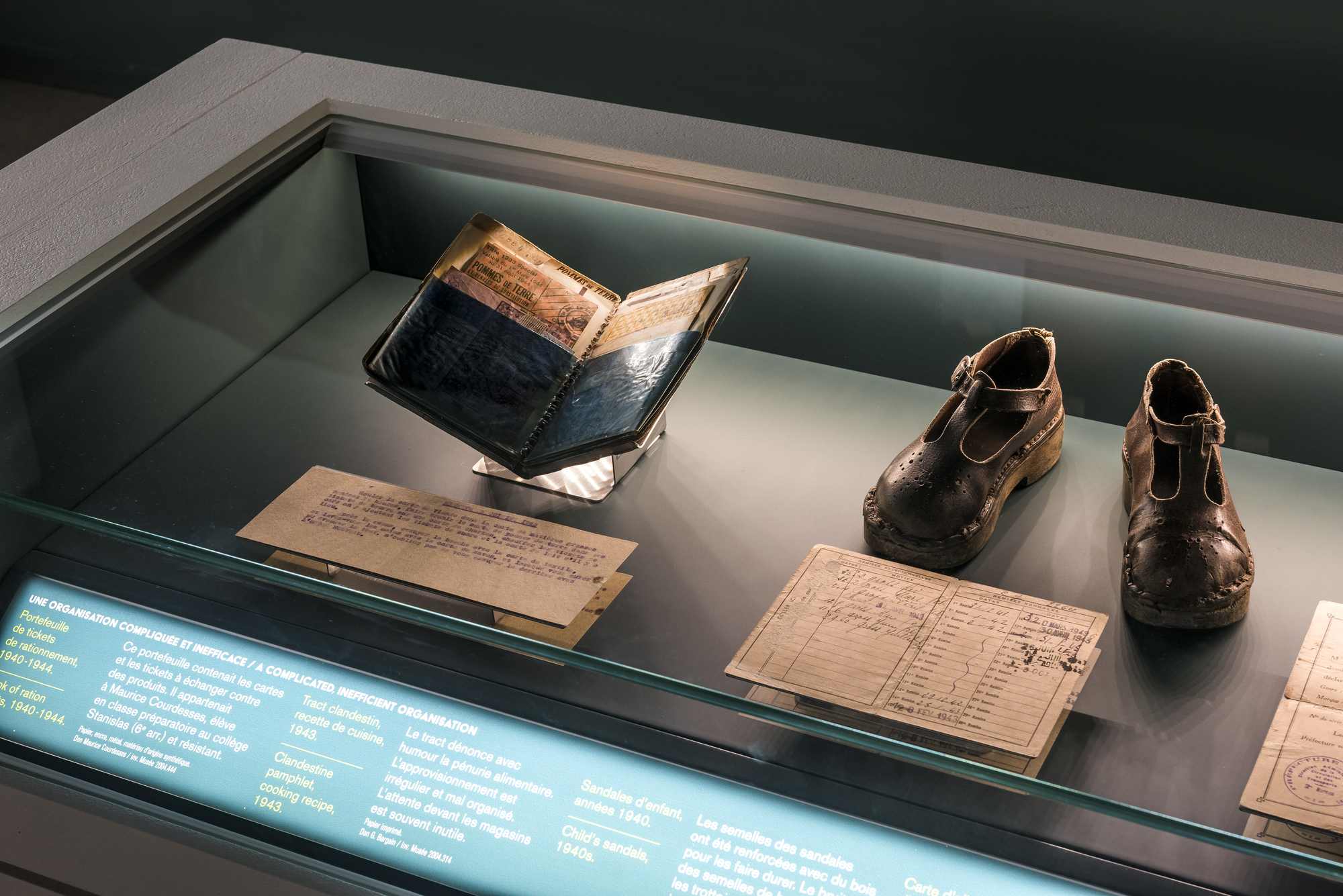 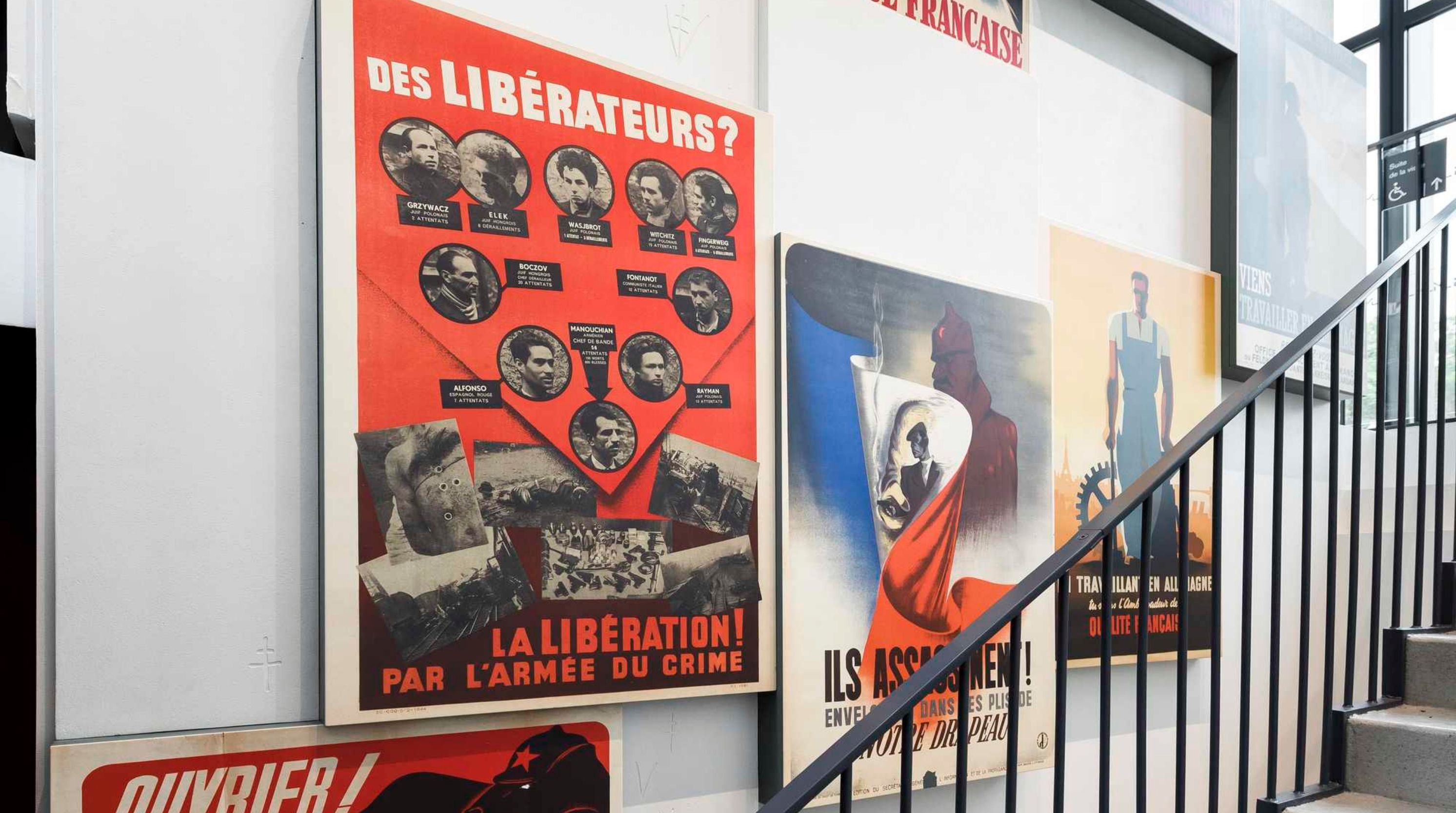 In the shadows, men and women risked their life to combat the occupier. Tracts show the diversity of their propaganda action, a forger’s materials evoke the production of false papers for clandestine agents, and a weapon recalls armed resistance. Faced with these determined individuals, who are incarnated in the portraits of the men and women of the Resistance, repression—internment, deportation, execution—was brutal and bloody. Warning posters were meant to terrify the population.

In June 1949, Jean Moulin made his choice. He left his apartment on Rue des Plantes (some of the furnishings from this apartment are on display) and went to the United Kingdom by way of Portugal. His papers established under a false name tell the story of his trip, and a parachute outfit evokes his return to France via parachute jump during the night of January 1-2, 1942. General de Gaulle entrusted him with the “Rex” mission to structure the Resistance. Eye-witness reports describe his work to coordinate and obtain unification from the movement leaders in the National Council of the Resistance, which held its first meeting in Paris on May 27, 1943, in spite of the Occupation. Moulin was officially a farmer with a gallery in Nice. Paintings from his personal collection are presented in the exhibition, including three works by Maurice Utrillo. Arrested on June 21, 1943, at Caluire-et-Cuire and tortured, Jean Moulin probably died on June 8, 1943. 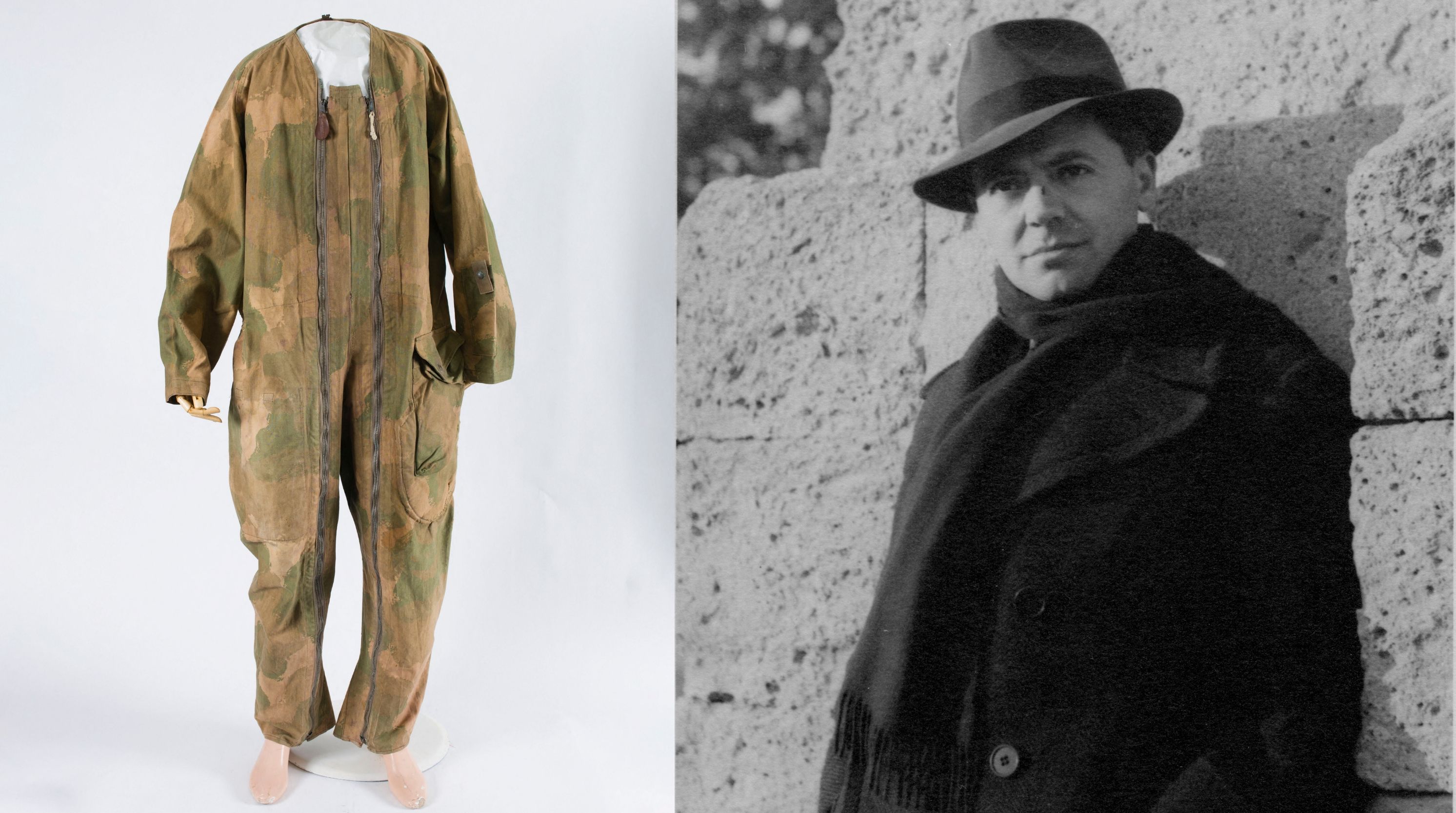 General de Gaulle entrusted Captain Leclerc with the mission of winning French Equatorial Africa to the cause of the Free French. Portraits of the Free French from the Leclerc attack column and items that belonged to these soldiers give an idea of their commitment in spite of a woeful lack of equipment. Nevertheless, they obtained the surrender of the Italian post at Kufra on March 1, 1941. Leclerc led raids in the Fezzan region of Libya in 1942 and 1943, before carrying out operations in Tunisia that had been suggested by war gains made by L Force soldiers. Starting in August 1943, Leclerc began the formation of the 2nd Armored Division by including volunteers who had come from France by way of Spain and soldiers from the Army of Africa. Portraits of men and women tell the stories of individual trajectories. Their equipment, which is included in the exhibition, was given to them by the American Army. 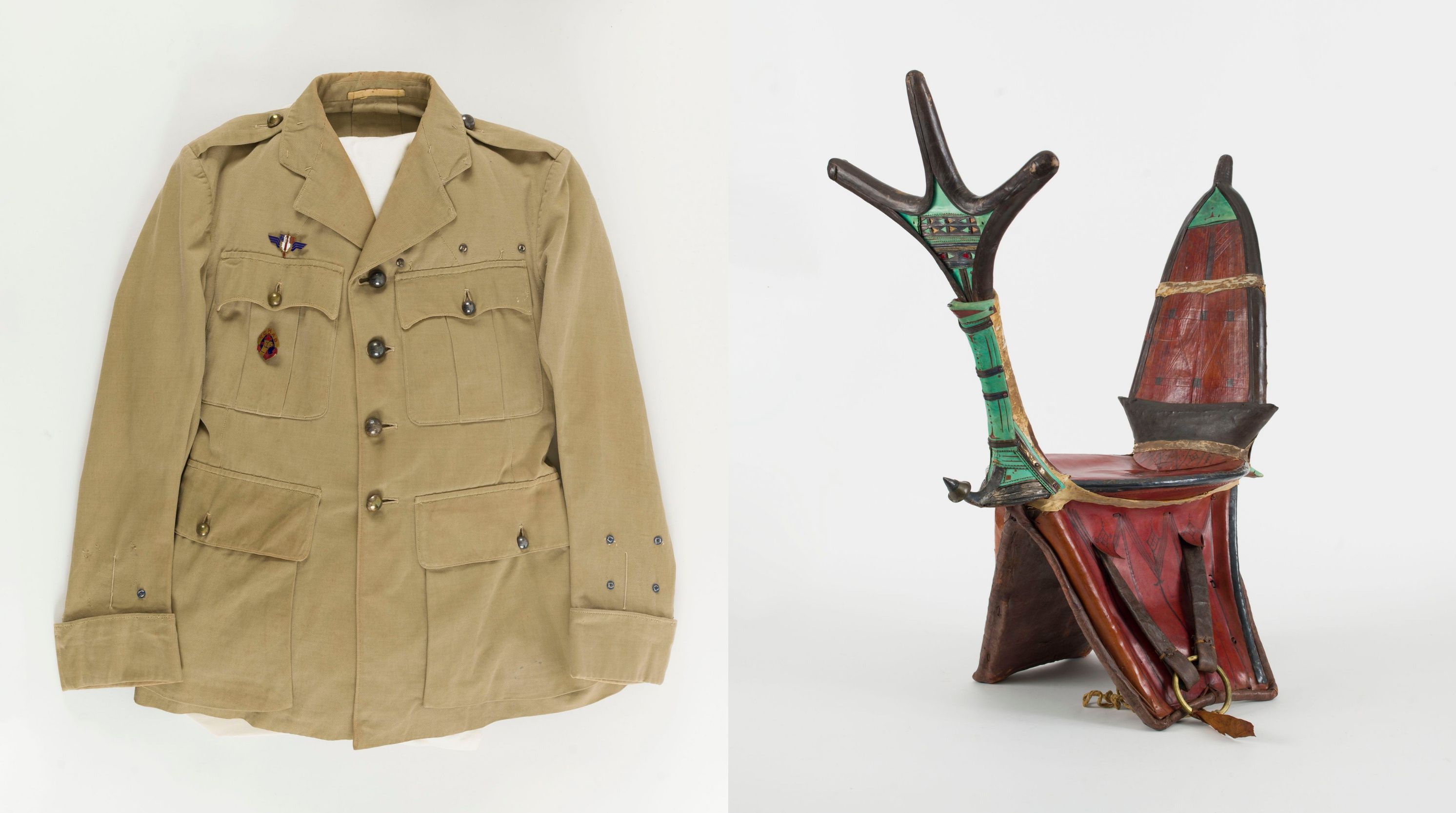 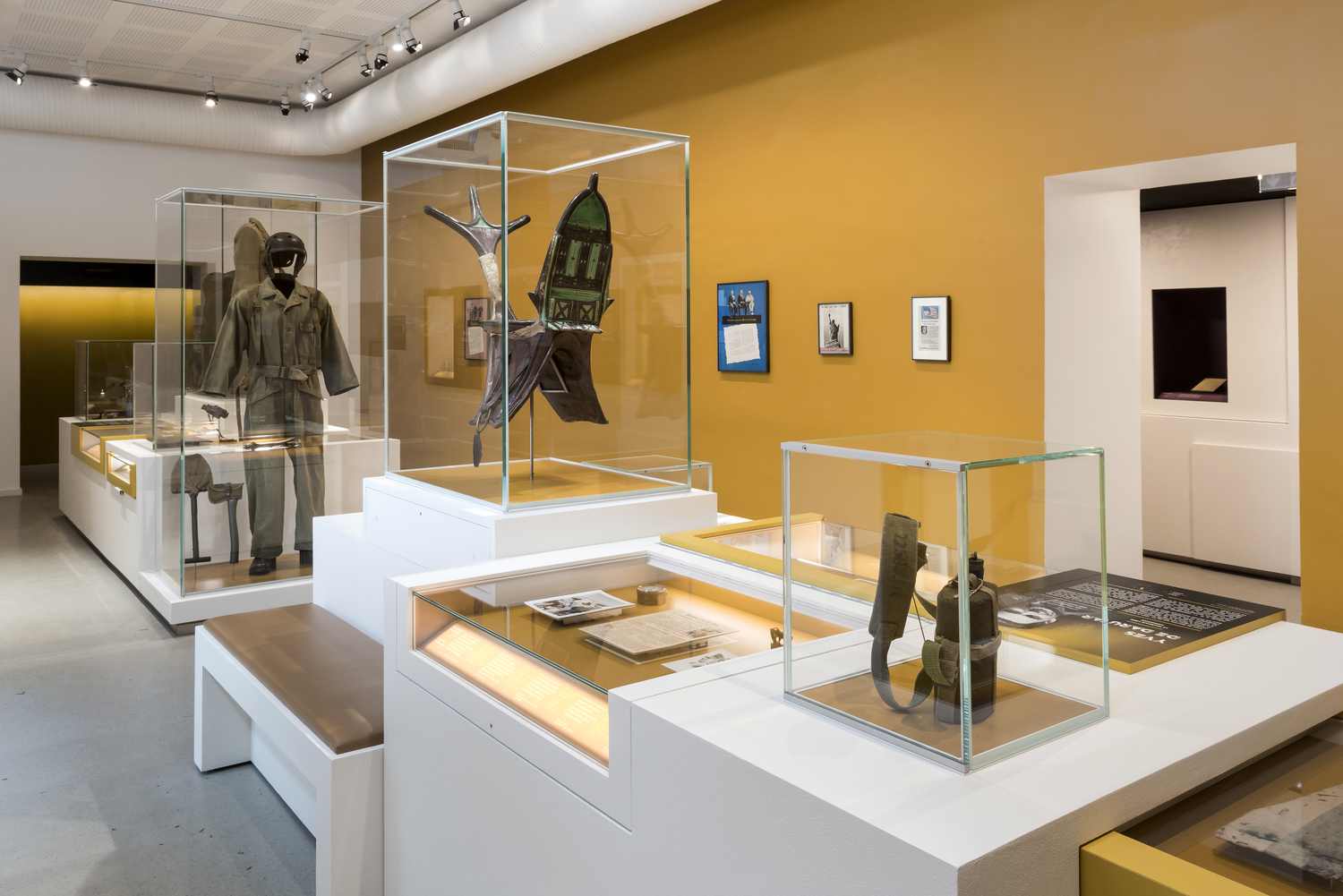 From spring to summer 1944, the perspective of a landing hardened the German positions. The 2nd Armored Division arrived in France on August 1, 1944, two months after the Allied landing in Normandy. Its participation in the hard fighting against the Germans is conveyed by items that belonged to soldiers who died in combat.

In August 1944, Parisians decided to take action to liberate the capital. The insurrection was launched on August 18. Police headquarters and the Paris city hall were occupied by FFI forces and barricades were put in place on the streets of the capital.

Tracts, documents, objects and films bring to life the daily struggle of attacks and retaliations, with the Germans entrenched in their positions. Finally, the 2nd Armored Division received the order to liberate Paris. On August 24, the first elements arrived in Paris and included Spanish soldiers from the RMT 9th Company (la Nueve), three tanks from the 501st Combat Tank Regiment and engineering elements led by Captain Dronne. On the following day, films show the 2nd Armored Division and the American 4th Infantry Division fighting in Paris. The surrender of German general von Choltitz was secured. An audiovisual installation composed of eighteen screens symbolizes France arisen and echoes the installation featuring the 1940 exodus. A montage of the parade on August 26, 1944, shows General de Gaulle descending the Champs Elysées surrounded by an immense and joyful crowd. But the traces of the Occupation were not immediately erased, as evidenced by acts of revenge from the population. This other side of the picture can be seen on the back of the screens. A PASSIVE DEFENSE SHELTER TRANSFORMED INTO A MILITARY COMMAND POST

An exhibition highlight, the passive defense shelter visit is proposed to visitors who aren’t afraid to be confronted with a hundred steps. This shelter was originally designed to allow administrative services to continue operations in spite of bombings. Visitors will discover the passive defense shelter with an original bicycle generator for electricity and will enter the rooms occupied by Colonel Rol and his staff of FFI forces from the Paris area in the midst of the insurrection, starting on August 20, 1944. For an even more immersive experience, a visit in augmented reality is available by reservation. 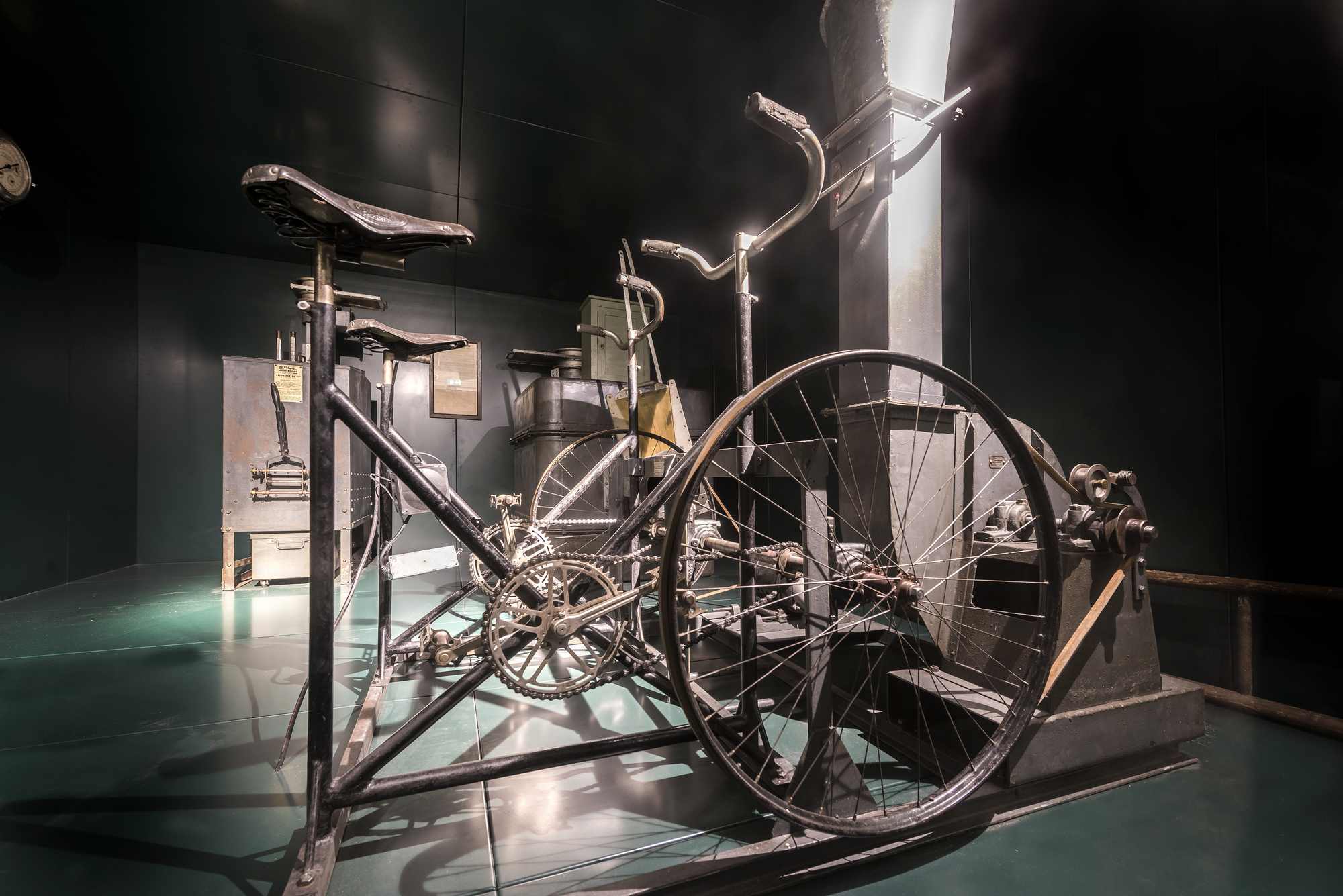 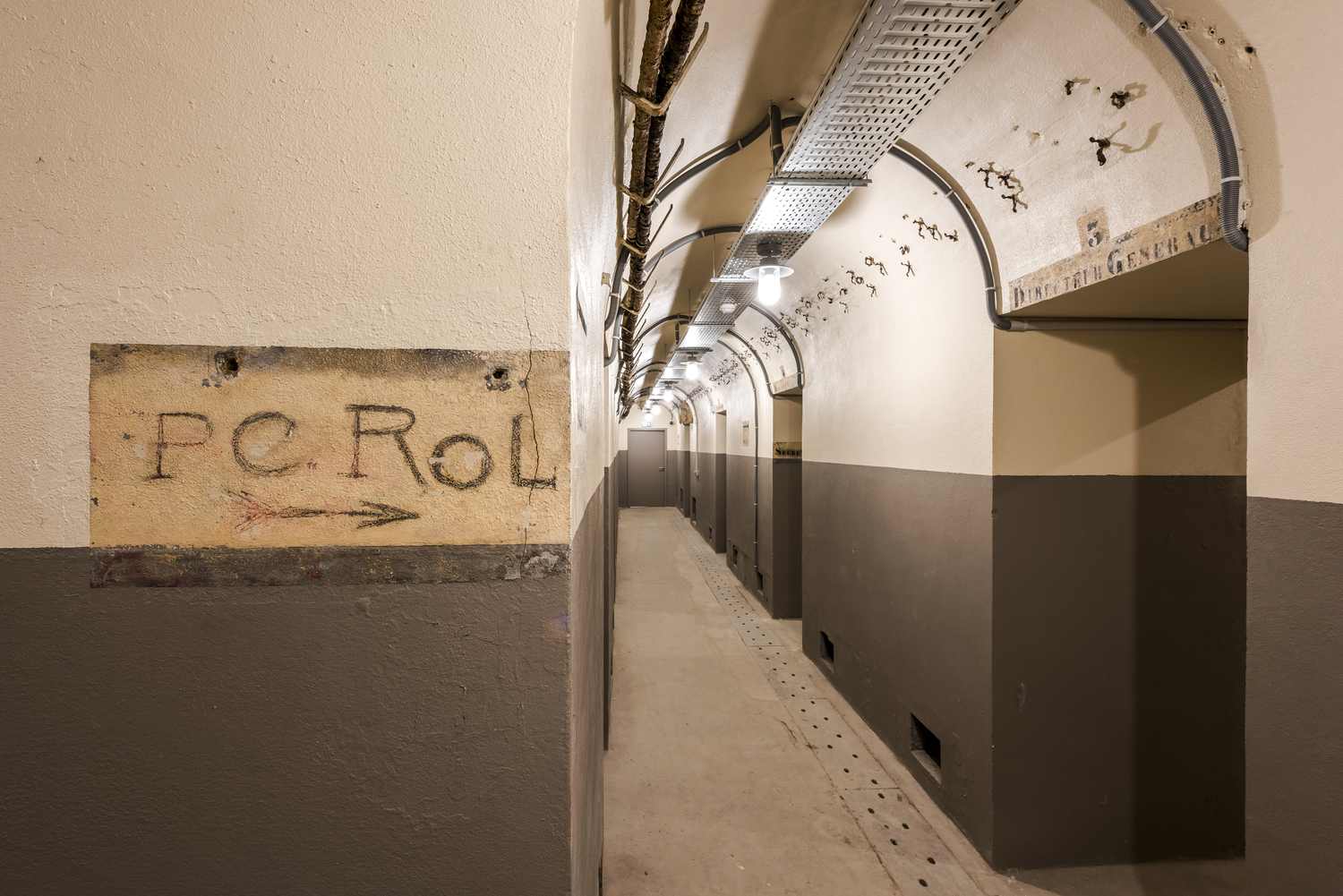 GALLERY: AFTER THE WAR AND THE LECLERC MISSIONS

The joy of the Liberation was unable to mask a harsh reality. The human toll of World War II had been particularly severe, and the return to normality was complex. General Leclerc represented France at the surrender of Japan on September 2, 1945, at the end of World War II. A film explains the situation confronted by General Leclerc de Hauteclocque in Indochina and describes his new mission as Commander of the Far East Expeditionary Corps.

This experience highlighted the General’s analytical ability and his pragmatism during the war. After Indochina, he was named Inspector of the Armed Forces in North Africa. His premature death in a plane crash on November 28, 1947, suddenly ended an outstanding career. Before visitors leave the exhibition, a frieze tells them what became of the men and women whose path they crossed along the display.